You don't have a customer login yet? Please contact us.

The last two weeks have been marked full of emotions, victories and defeats as well as exciting races and stunning performances of the athletes. Reusch is more than happy about all the successful races and competitions. In total Reusch won 70% of all possible alpine single competition medals as well as Gold in the Team Event.

The amazing result is the best medal count Reusch ever had during the Olympic Games!

Besides this Reusch can celebrate even more amazing results.
Check the below highlights and stroll down the memory lane of the amazing Olympic Period. IN SOME COMPETITIONS REUSCH WAS JUST UNBEATABLE


OTHER ATHLETES MADE HISTORY WHILE WEARING REUSCH GLOVES

Johannes Strolz had a really difficult start into the World Cup Season with no position in the Austrian squad. But he didn't let himself down and drove the World Cup without a supervisor. Finally, in the Olympics, he got so much rewarded for his will!
Like his father Hubert Strolz in 1988, he won the gold medal in the alpine combination and did another silver medal during the Olympics. On top he was also part of the success of the Austrian Ski Team during the Team Event! Congratulations!

Matthias Mayer is the new champion in the Austrian Ski Sport. During the Olympics in Beijing, he won his third olympic gold medal. The last two gold medals during Olympics, he won in the Super G of PyeongChang in 2018 and in the Downhill in 2014 in Sochi. Congratulations to this successful part of your career!
AND SOME CELEBRATED THEIR FIRST OLYMPIC MEDAL WHICH IS SO MUCH DESERVED


 
Congratulations also to the Swiss Ski Crossers who won Gold and Silver!

RYAN REGEZ
ALEX FIVA BE THE ONE
THE NUMBER ONE!

WINNER OF THE SUPERCOPPA ITALIANA

AFTER 120 MINUTES OF AN EXCITING GAME AGAINST THE RIVAL JUVENTUS, FC INTERNAZIONALE MADE IT! THANKS TO AN PERFECT PERFORMANCE OF THE PLAYERS AS WELL AS OF OUR REUSCH HERO SAMIR HANDANOVIC!

ALL THE BEST FOR THE REST OF THE SEASON!
KEEP ON FIGHTING

REUSCH DOMINATES ON THE TRACK

AMAZING AND SUCCESSFULL WEEKEND FOR THE REUSCH ATHLETES!

Marco Odermatt made it! After 14 years he broke the spell and finally won as a swiss ski racer the Giant Slalom competition in Adelboden. Congratulations Marco for this amazing and stunning performance.

The second and third place on this day was also in Reusch's Hands. Manuel Feller and Alexis Pinturault were rewarded after an excellent performance on the track!


After an exciting and incredible Slalom competition in Adelboden on Sunday, congratulations to Johannes Strolz for the victory and Manuel Feller for the second place.


The Reusch Ladies also showed an excellent performance in Kranjska Gora. Congratulations to Petra Vlhova for the victory in the Slalom and cheers to Wendy Holdener for the second place. Reusch was also represented on the podium of the Giant Slalom. Super performance Tessa!

CONGRATULATIONS TO ALL OF YOU
We wish you the best for the next races and keep on fighting!

MORE TO COME IN THE NEXT WEEKS FOR SURE! #BeTheOne

A DAY TO CELEBRATE ALL NUMBER ONES
WITH A SPECIAL GLOVE LINE.

Along with the Reusch Goalkeeper Day we present the special “Be The One” capsula consisting of timeless styles with high performance:

The top style of the line offers maximum grip in all weather conditions as well as a high impact absorption boost.With the Freegel Technology on the backhand the gloves guarantee maximum flexibility and lightness as well as stability and control. The Evolution Negative Cut offers a snug fit for a better ball control. Watch out for the Pure Contact Gold X in this capsula collection, which has a neoprene backhand for even more flexibility.
BE THE ONE
THE NUMBER ONE!

The new spooky INFRARED collection is out now. Four different styles with four different opportunities. Doesn't matter if you choose the Reusch Grip Speedbump, Reusch Grip Silver or Reusch Grip Solid. All these palms guarantee a maximum of grip, stickiness and durability.

with the special INFRARED design and shock your rivals! Spooky black, shocking orange design which gives you the maximum of what you need.
#BeTheOne

EURO 2020
LOOKING BACK TO A TOURNAMENT FULL OF EMOTIONS!


It’s been highs and lows
Taken opportunities and missed chances
Partying on the streets and crying in the stands
Raised flags, goosebumps and chants
Rising stars and a new generation
Emotions, thrill, adrenaline. ⁠⁠
This is FOOTBALL. 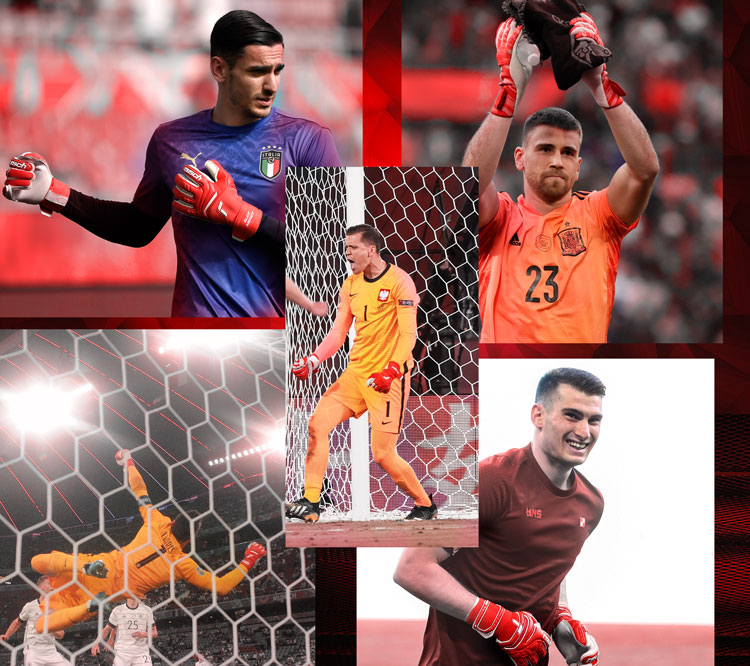 THANKS TO ALL OUR GOALKEEPERS
FOR TRUSTING IN REUSCH 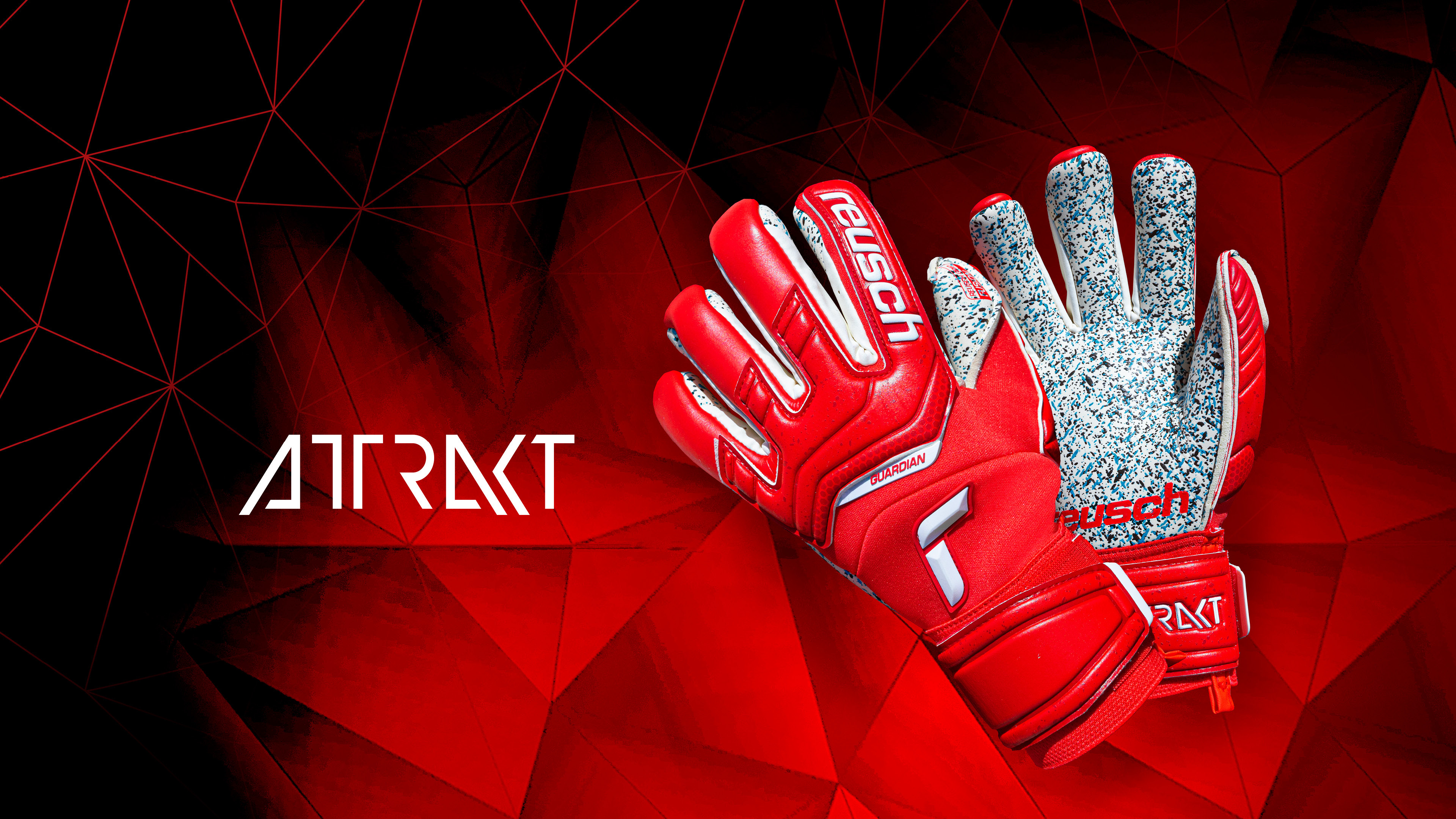 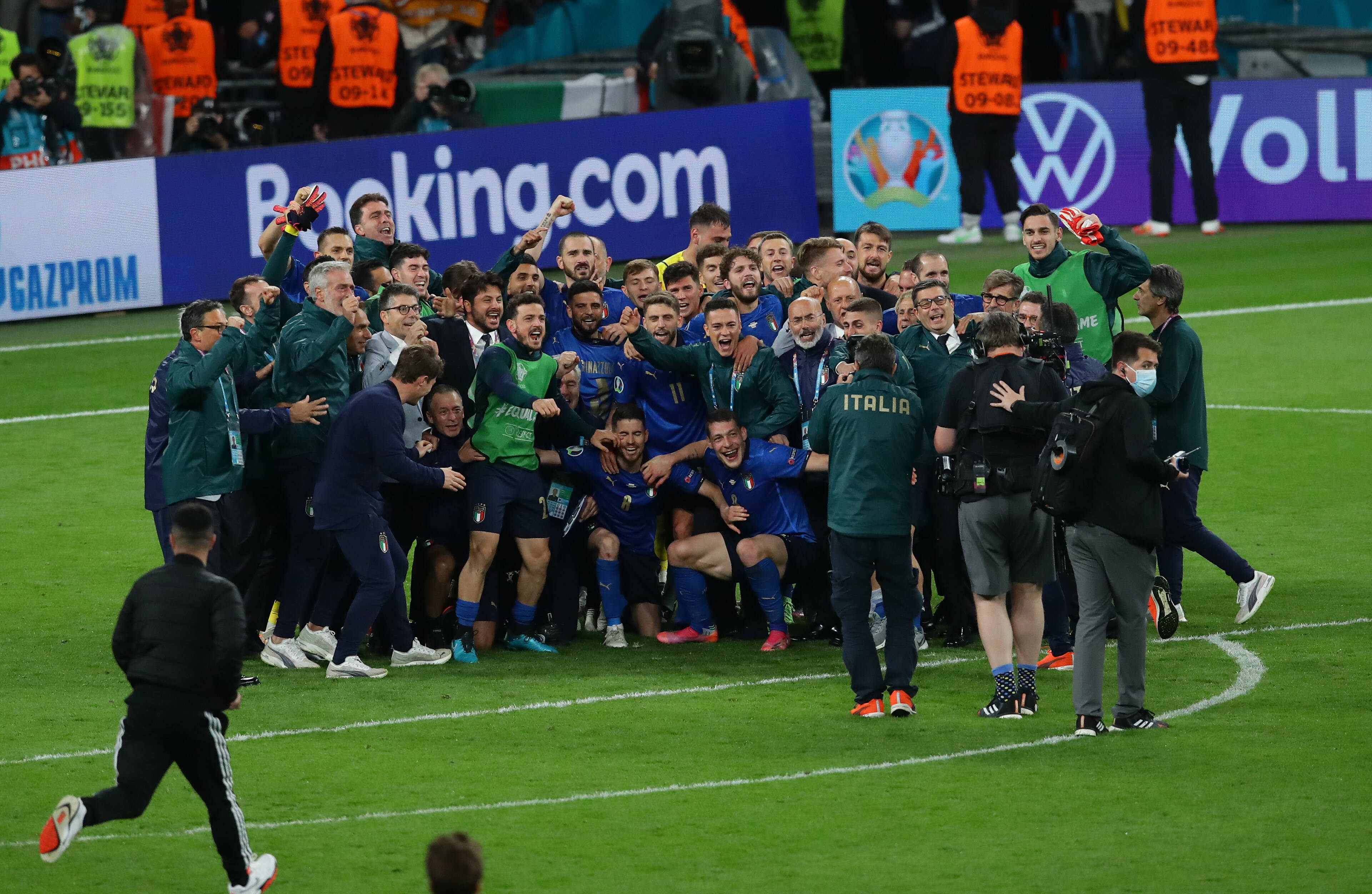 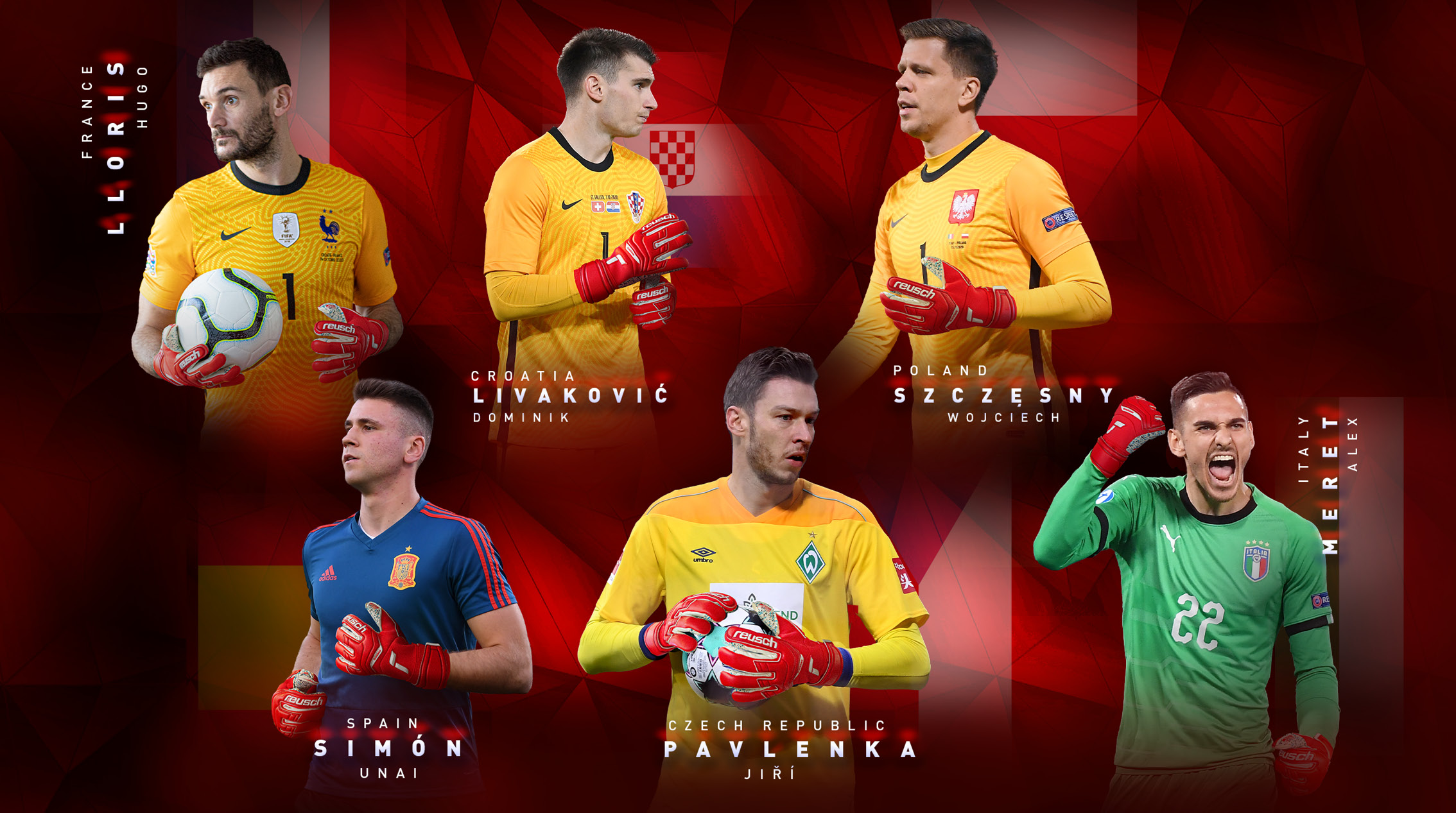 An exciting season comes to an end! ❄️ 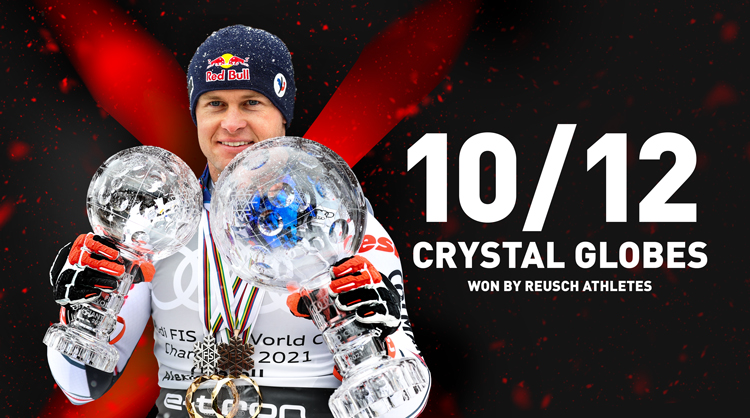 We are proud to announce that 10 of 12 possible crystal globes,
including both overall crystal globes, were won by athletes equipped with Reusch gloves, some also equipped with our headwear.
This World Cup season was definitely an extraordinary one!
Nevertheless, we can look back to exciting races, fantastic wins and incredibly strong performances by our Reusch World Cup Warriors. 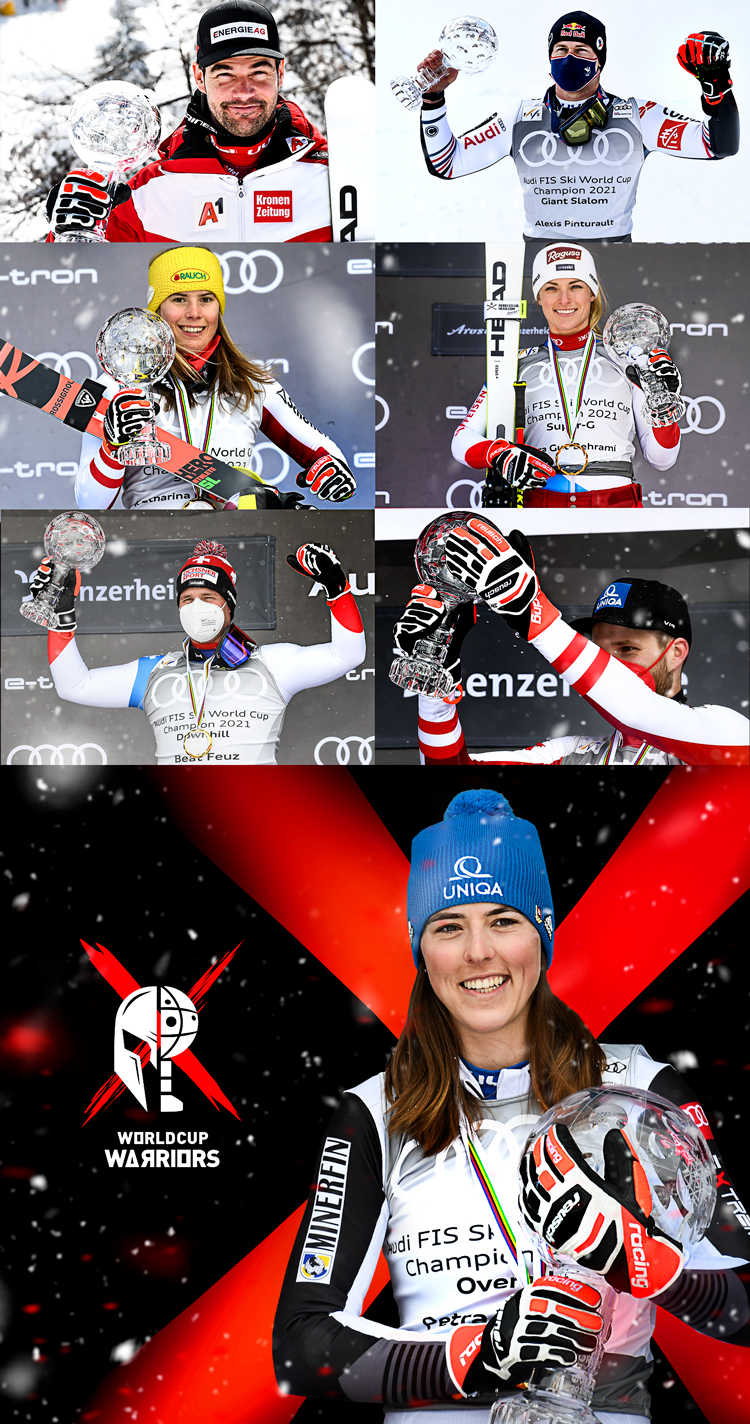 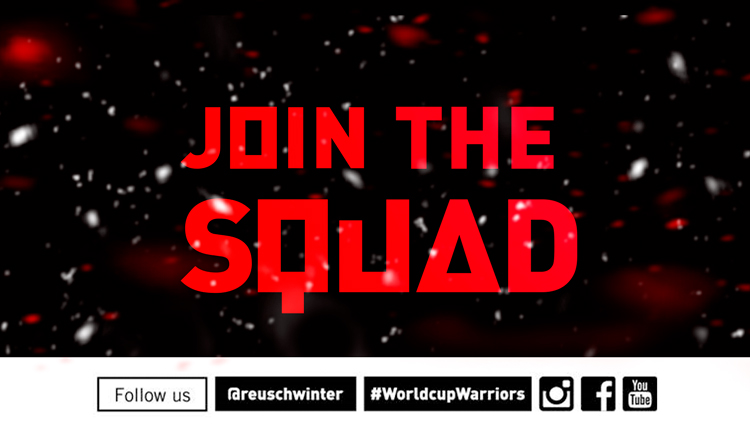 Presenting the next generation Worldcup Warriors.⚔️

THE CHAMPIONS ARE CROWNED!


Join the fight against COVID-19 and donate now!
Let’s reach out our hands and help.

Together with our international athlete-community we have decided to contribute to the fight against the COVID-19 pandemic by raising funds for the ASST Fatebenefratelli Luigi Sacco hospital in Milan (Lombardy/Italy), one of the cities and regions that have been struck in the most tragic way by the Coronavirus disease.

All funds will go to ASST Fatebenefratelli Luigi Sacco in order to support the hospital’s non-stop efforts in this dramatic emergency situation. Your donations will be directly used for the acquisition of equipment, goods and services as well as the implementation of specific initiatives to improve care and assistance activities. This fundraising campaign is officially approved by the receiving organisation (ASST Fatebenefratelli Sacco).

Thank you to each single one of you for your support – even the smallest donation helps!

All of you goalkeepers, now we are all part of the same team!
All of you skiers, this is our most important race!
All of you out there, together we are strong!

Join the fight against COVID-19 and donate now:
www.gofundme.com/ReuschHelpingHands

AN EXCITING WORLD CUP SEASON IS OVER!


The Crystal Globes have been assigned to the best athletes of the year
With the cancellation of the remaining World Cup races in Åre, Kranjska Gora and Cortina, the FIS Alpine Ski Racing season is officially concluded.

Looking back to the last five months, the World Cup offered a full mix of emotions with exciting and super tight races thanks to the biggest ever field of potential winners, but unfortunately also a tragic accident as well as finally the bitter and early end of the season.

All those who finished on top fully deserve to be there, that’s why we would like to say congrats to all World Cup winners! With a total of 10 Crystal Globes, Reusch athletes have once more played a leading role among the world’s best skiers.

Slovakian Reusch athlete Petra Vlhová crowned herself as Slalom-Queen by winning both Slalom and Parallel globes.

Downhill World Champion Corinne Suter proved herself as fastest lady on the planet by winning the Downhill and Super-G World Cup for the first time in her career.

The ladies' season was heavily impacted by the tragic passing of Mikaela Shiffrin's beloved father Jeff and her absence in the final races. Stay strong, Miki!

The men's World Cup was not decided until the last second. With the cancellation of the Kranjska Gora races and the finals in Cortina, Alexis Pinturault unfortunately missed the chance to win his first Overall World Cup by only 54 points. Nevertheless, the Frenchman claimed his fourth Crystal Globe as Alpine Combined winner.

The technical disciplines have also been open until the end, but Henrik Kristoffersen finally crowned himself as Slalom and Giant Slalom Champion. Congrats, HK94!

Besides winning two women's globes and the Nations Cup, Switzerland was the dominating squad as well in the men's competitions. With Speed-Superstar Beat Feuz winning the Downhill globe, Mauro Caviezel the Super-G and Loïc Meillard the Parallel ranking, the Swiss squad clearly dominated the 2019/20 World Cup season.

Congratulations to all winners!

The revolutionary 3D latex technology is back!

We proudly present the second generation of the exclusive Reusch SpeedBump™
technology. A completely renewed latex pattern with sharper and higher latex spikes
ensures even more friction and tactility for professional performances between the sticks.

Based on the super tacky G3 Ultra Soft palm foam, this three-dimensional latex guarantees maximum all-weather grip and reliable abrasion resistance.
Compared to traditional plain latex surfaces, the 3D-shape offers increased
friction between the glove and the ball for best grip and control.

Welcome to new levels of lightness and grip!

Dominate the game with the all new Pure Contact 3 goalkeeper gloves!

The third generation of the super flexible, light, breathable and grippy glove model
features a brand new design, new technologies and a revised cut, tailoring the glove
as ergonomically on the hand as no other product before.

By combining innovative materials
we created our lightest professional
goalkeeper glove line ever.


PURE CONTACT 3 G3 DUO
The wave-formed DUO™ latex on the inside of the palm guarantees maximum cushioning and a unique hand-glove-ball contact for the most direct feeling possible.

We are proud to announce that our brand new racing glove Worldcup Warrior GS was chosen as winner of the prestigious ISPO Award 2020.

Out of more than 430 submissions, a jury of 42 highly respected experts of the sporting goods industry selected the most innovative products in four different categories.

Thanks to the use of innovative materials and sophisticated technologies, providing the athletes with maximum protection and an extremely precise fit, the Worldcup Warrior racing glove was chosen as winner in the "Snowsports" category. The Warrior has been developed in close cooperation with some of the world's most successful ski racers such as Mikaela Shiffrin, Henrik Kristoffersen, Petra Vlhová and Alexis Pinturault and meets the highest demands and needs on the racing track.

THUMBUARD
As the most exposed part of the hand, thumb injuries are very common among ski racers. To minimize the risk, this glove protects more than 80% of the thumb area with ceramic printed protection elements.

SAFETY UNIT
This exclusive one-piece protection system reduces the risk of injury around the entire upper backhand through a total impact dispersion and so absorption of even the hardest hits on the racing track.

WRIST SHIELD
The glove’s outstanding protection from top to bottom is completed with a preformed composite guard around the neoprene cuff, adding additional support when tearing down the red and blue gates.

GROUND CONTROL
Slim embossments in the form of streamlined rails on the back of the fingers and the upper backhand increase the athlete’s balance and control when touching the snow during high-speed turns.

HUGO LLORIS IS BACK!

109 days after his terrible elbow injury,
World Champion Hugo Lloris has made his long awaited comeback.

With the captain sign around his arm and his brand new
Attrakt G3 Fusion Evolution NC Guardian gloves on his hands,
the French number one guided the Spurs to an enormously
important Premier League victory against Norwich City.
We missed you, Champ! ❤️